Is there nothing worth watching on television any more? I don’t think so! Check out MotoGP. The hugely expensive broadcasts from DORNA Sports, holder of the TV rights for MotoGP, have been rated as “highly recommended”. We were allowed behind the scenes.

Brrr – it’s cold in here! We might catch a cold. And it’s dark to boot. On stepping out of the glaring Aragón sun and into this windowless production truck, at first you can’t see a thing. It’s an act of faith to put one foot in front of the other – you could trip over anything. Your eyes need two or three minutes to get used to the dark. This is a different sort of dark room. 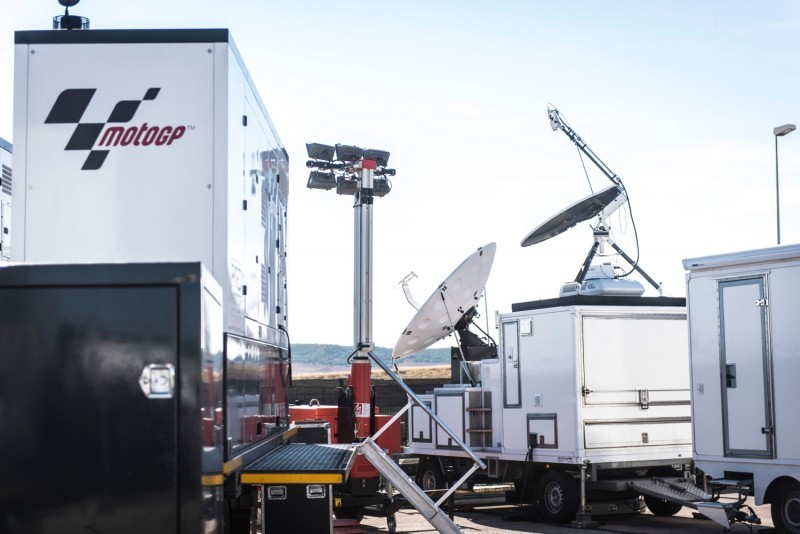 DORNA co-worker, David Arroyo, explains that the temperature is due to the extremely sensitive electronic equipment. And the people working in here also want a comfortable working environment. But they do work up a sweat – when something unexpected happens on the track and they have to react like lightning.

Fourteen people are sitting in front of us in two rows, all with headsets on. Eight of them are responsible just for slow-motion replays. Two look after the graphics. One co-ordinates all the images received from the on-board cameras on the bikes and controls the 360-degree camera mounted on Bradley Smith’s bike this weekend. Two are responsible for news coverage. They follow Twitter, Facebook and other websites and keep one eye on time-keeping: If a rider sets a best time on a sector, they drop in a discrete comment that it might be worth following this rider for the rest of his round. 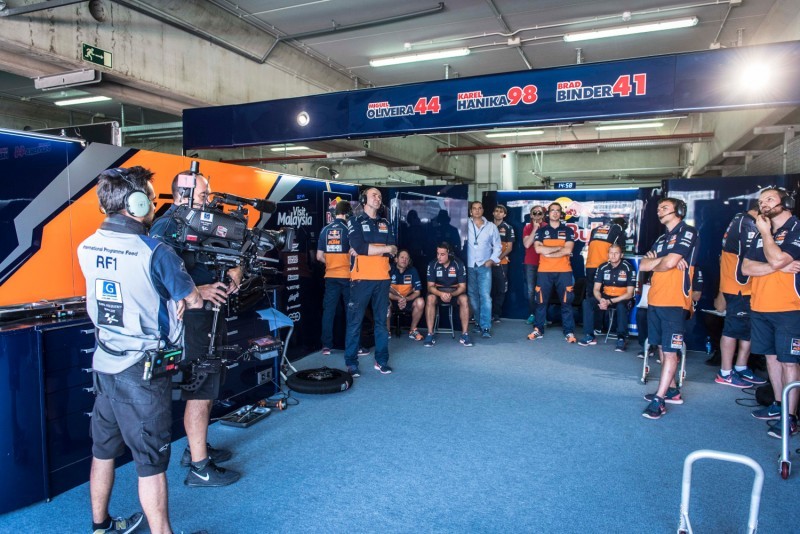 The man they all work for sits front right: Sergi Sendra, official title, “TV Director”. He is the master of ceremonies. Like most of his DORNA co-workers, Sergi is a Catalan and he presides over a desk with about 500 buttons which he uses to decide which image is sent via satellite into the living rooms of MotoGP fans around the world. Sergi is a virtuoso – without taking his eyes off the countless monitors on the end wall of the room, his fingers fly over the buttons. This is multi-tasking to perfection – look, press buttons, talk. Yes, Sergi talks all the time. “Three, two, one, go”. Cut to Rossi’s helmet camera. Then Sergi decides to go to Andrea Iannone who is sitting in the Ducati box. “Closer, closer”, shouts Sergi sharply. “Right up close.” Sergi wants more tension in the image. The cameraman down by the boxes obeys and zooms in more. Now Sergi calms down.

Seconds later, there is some slow-motion footage of a bird including a graphic (flying with the bird!) stating its species: flame-colored tanager. “Sergi loves animals”, says David Arroyo. How much did that one image cost? A cameraman noticed it, a replay specialist edited the sequence, the light technician mixed the colors and someone programmed the graphic. All for eight seconds of a bird flying away. And right at the end, Sergi has pressed the right button.

DORNA Sports is located close to Barcelona: its MotoGP output is some of the best footage available in the sporting world. The numbers speak for themselves. Cameras per race weekend: 148. Yes, one hundred and forty-eight. First, there are 23 fixed cameras located around the Aragón track. Two on every important corner: One tracks the leader, the other whoever is behind. Hardly anything is missed. Then there are 99 on-board cameras spread across all three classes. Most of them are “gyro cams” so that when Marc Márquez is canted over at 62 degrees, the gyro cam is still horizontal.

In MotoGP, nearly every bike has three cameras: one facing forwards, one backwards and one on the rider’s back. The top riders have extra cameras: on the throttle twist grip, the shift lever and the helmet – or wherever else. DORNA technicians never run out of ideas.

It is these on-board images that turn a MotoGP broadcast into gripping TV – they are unique to the sport. “Our on-board cameras are not retro-fitted to the motorcycle”, says Manel Arroyo, Daniel’s father and Managing Director of DORNA Sports. According to Arroyo senior, Honda, Yamaha and other manufacturers take the mounting points for the cameras into consideration while they are designing their motorcycles. Arroyo explains the DORNA philosophy: “On-board cameras are an integral part of the motorcycle. They are as important as the clutch and the brakes.” 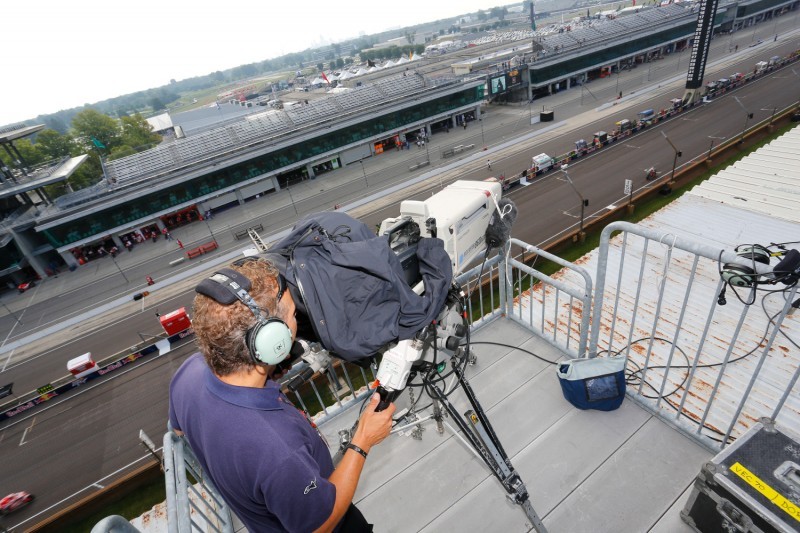 DORNA Sports secured the TV rights from the International Motorcycling Federation (FIM) in 1992. Before that, the broadcast quality was pathetic. The local national broadcaster was responsible for the production at each grand prix – and more or less muddled through the weekend as best they could. The winner crossing the finish line was often missed, graphics were incorrect, the director would stubbornly ignore the most gripping duels and some corners did not even have a camera.

With DORNA Sports, every broadcast follows a fixed pattern. Broadcast schedule, jingles, graphics, interviews – everything follows the pattern. And the personnel stay the same as well: all of the more than 200 TV co-workers are flown to every race. How about using Australian personnel in Australia to save on travel costs? “No,” says Manel Arroyo, “that would cost in terms of quality.” So, obviously, every DORNA co-worker always has the same task. For example, the same cameraman is always used at the first corner whether in Doha, Assen or Aragón: Miguel Tello. Miguel knows how a MotoGP field moves after the start; he knows the corner from previous years and exactly how far he can take it. 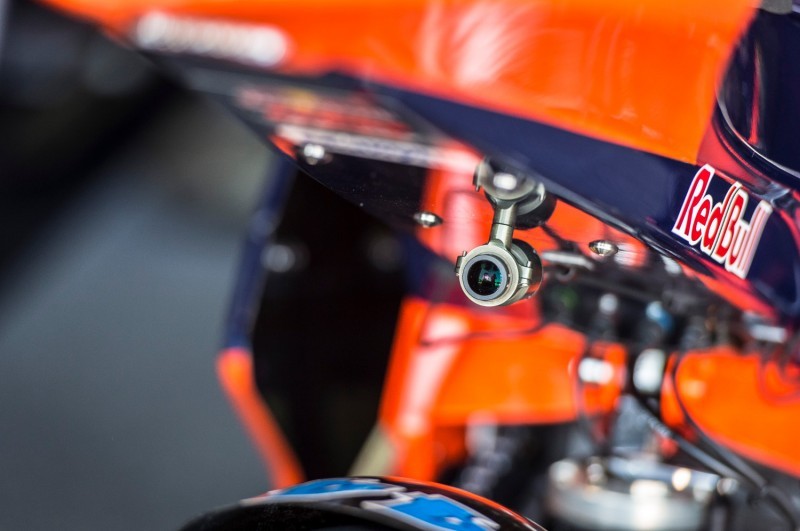 This is why DORNA Sports’ broadcasts are of a quality that other sports can only dream of. DORNA Sports sells its product to broadcasters around the world. Eurosport has bought the live rights in Germany and ZDF is allowed to show features and race highlights after a certain amount of time.

The TV rights and productions are just one part of the deal with FIM for DORNA Sports. It includes ownership of a range of marketing and advertising rights. Basically, MotoGP is a DORNA series. If the watch manufacturer Tissot wants to book an advertising banner on the race track, it has to pay DORNA Sports and then trust that DORNA positions its cameras so that the Tissot logo is well placed in the shot. Similarly, the team sponsors hope that the directors do not ignore their bike. Advertising partners are not disappointed. “Our technology tells us how many minutes and seconds each bike was on screen for each grand prix”, says David Arroyo. The teams are given reassurances in advance of how long their motorcycle will be seen on TV. If these values are being missed to a significant degree, says David, the producers can intervene. However, Manel senior insists that the TV production is driven exclusively by journalistic principles: “Whoever is in front gets more coverage.” 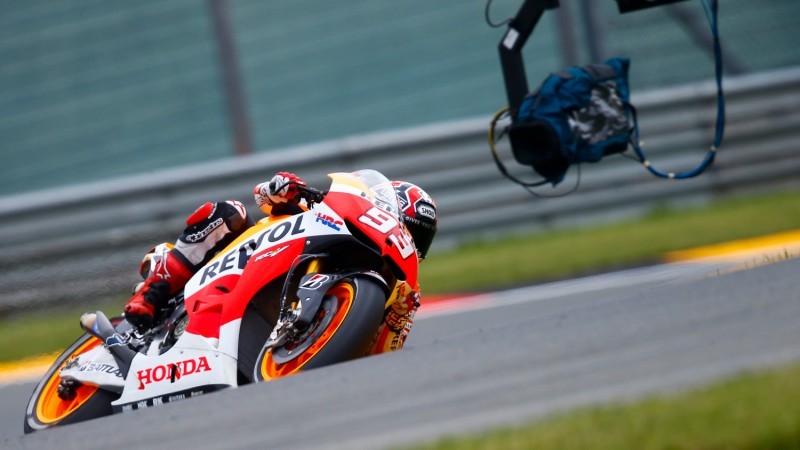 Everyone at DORNA Sports is a perfectionist – in every respect. In the end, it is the fan at home who is the real winner as he enjoys gripping TV. And people say there’s nothing worth watching nowadays!

Look at race preparation and dozens  of cameras shooting in  Qatar. It’s awesome!